Invitations for the 84th Anniversary of the Fox Theatre, Redwood City, CA

Recently we were asked by the Fox Theatre owner Mr. Eric Lochtefeld to design his theater’s 84th Anniversary Party Invitations. Of course we were honored to work with him. Here is the invitation design: 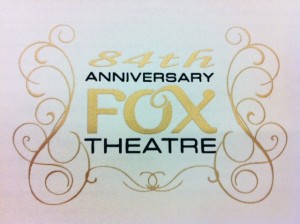 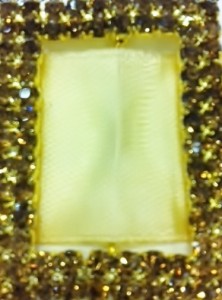 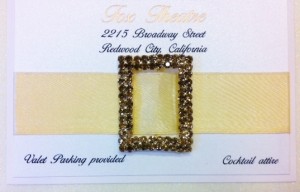 The invitation is from K Paper, it consists of four layers of stationery plus a yellow-amber rhinestone buckle affixed on top a gold colored satin ribbon. The printing is silkscreen thermography in black and gold ink. The second layer of the invitation is glitter gold and the top layer is pearlescent stock paper.

The Fox Theatre’s Anniversary Party will serve delicious cuisine by Chef Donato and entertainment will be provided by non other than Joan Rivers, star of Fashion Police on the E! Network. We look forward to attending this fun evening with one of our favorite entertainers in historic Fox Theater in Redwood City, California.

The Fox Theatre was built in 1929 and received it’s historic recognition in 1993 as an important building in the city and an integral part of it’s real estate. You can read more about the Fox Theatre on their website and see their upcoming performances.

Please see our blog for more unique designs and inspiration, check out more anniversary invitations on our Anniversary Category. You can come in to Hyegraph at 3 Embarcadero Center in San Francisco or Shop Online for fun cards. 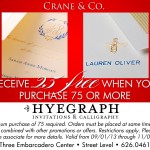 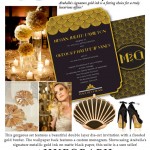